I’ve been on this journey for about 8 months and it’s been an interesting one.

My family’s life in a pod and my car, then a jump to the other side of the country.  My professional self, going from working within strategy teams and overseeing full-scale projects, to shifting into an integrated role within a mid-sized agile environment, being part of a small UX team, assigned at the core to 2 agile ‘squads’.  The mental shift has been rough.  I’ve been overwhelmed, disoriented, and trying very-very hard to maintain perspective while still being able to focus.  Oh yes – and to retain patience.

Read on to hear a tiny bit about me struggling with Lean UX practices, Agile and Collaborative design.

Recently, I have relocated across the country and have landed in the small town of Cary, NC, just outside Raleigh, the state capitol of North Carolina.  A place that – while more humid and warm – has a lot of similarities to the Pacific NW (the Seattle area) where I’ve lived and worked for so many years.

My work?  Still UX – working directly with the development teams.  I am assigned to 2 ‘squads’ in an agile team that still has a few remnants of its once-past as a fairly small team who ran, from the sounds of it, in a waterfall fashion. (For those who don’t know what waterfall is, wiki to the rescue.)

A too-small team getting stronger

When joined the company, there was a lot of work and not enough people to truly organize it and have UX and its role in the squads as a well oiled machine.  I knew it was possible – it had to be – but how?  The UX director and the other UX designer on the team had an enormous workload and with me in there, trying to help – let’s just say, they weren’t too happy at first.  The UX team and I, along with our newly joined graphic designer rolled up our sleeves and got to work.  Chaotic meetings?  Gone.  Low transparency about our process?  Transparency increased.

I managed to step on a few toes in the process, yet every week has gotten a lot better.  It took a lot of discussions and while I pushed ideas forward, the pushing truly came from everywhere and everyone.  I think I was perhaps just the last straw that made everybody break down and just get things more organized.

Now there are good, solid, ‘official’ processes that make sense. It’s time to work within that process.

Here’s where I fall down.

If anybody has ever read the Lean UX book, by Jeff Gothelf and Josh Seiden, one of the major things they mention is that UX designers aren’t and shouldn’t be super hero ninjas that come in, create awesome things and exit the scene.  We, in the agile space, are more conversation facilitators who focus on coming up with solutions and testing assumptions.  The key to this is collaboration with everyone.

Why do I fall? 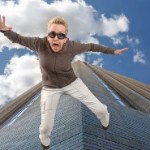 fall because I’ve been the super hero ninja.  For years!  My capabilities have been geared to coming in and rescuing projects in the nick of time.  On time – under budget and super simple easy to use.  I have been the “Let’s get this show on the road!” facilitator, cutting through all of the crap, saying the things that people may be thinking but aren’t speaking up about and just – getting shit done.

At times, I feel that this lean-style collaborative process takes away 3/4 of my super powers.  It takes away from my ability to sit and do deep-thinking.  I don’t tend to do that in a group setting.  Not at all.  I know I need to change, but it’s not easy.

So what’s the real issue?

Collaborating before I’ve had time to really think through a thing!
There is a lot of pressure.  This collaboration thing – if done prior to my having time to context switch and get shoulder-deep into the information…

On top of all of that, I have seen the way some look at me.  There is this perception.  I came from Seattle, one of the major hubs of innovative technology and UX.  I’ve worked on projects for some pretty big name companies and this makes it seem like I have a mountain of experiences that can help craft a better way.  I see others look to me as a person who has answers, who SHOULD have the answers.  At first, I really tried to bring that out.  It was like trying squeeze water out of an already wrung hand towel.  Sometimes, good examples came out.  Other times?  Different time, different team – very different dynamics.  Doesn’t apply here.

Answers?  … I really don’t have them.  Particularly when I’ve had to context switch between too many features, too many ideas too often.

Do you know what?  Most of the time, I’m just as lost as everybody else.  Just trying to do the right thing, find the best answers, and am swarming with possibilities.

The road is bumpy and it’s different.  Transitioning from UX Super Hero to collaborative solutions-finding facilitator.  Wish me luck in this transformation!  I think I need it.